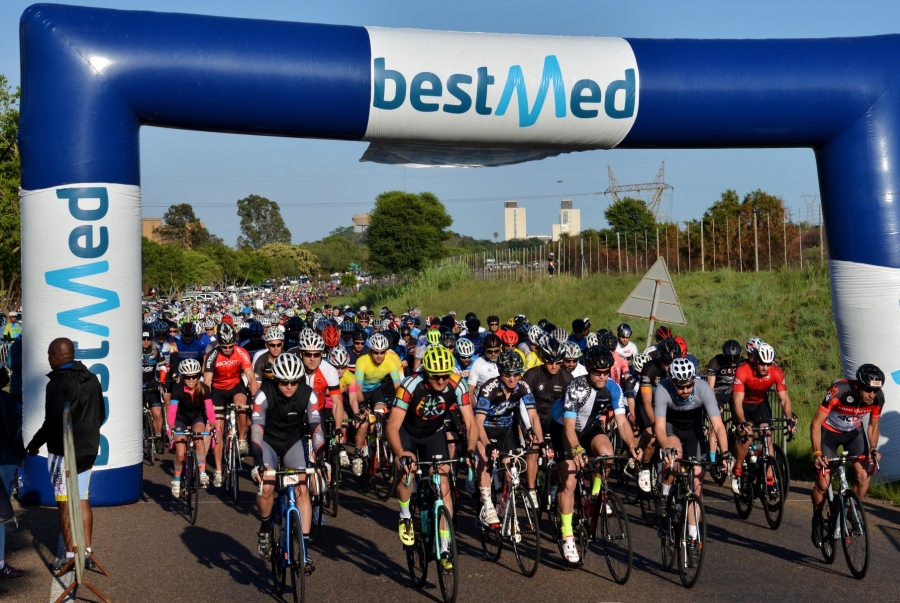 Thousands of cyclists line up at the start line during the 2018 Tshwane Classic, presented in association with Office National and Jacaranda FM. Picture by Deon Haak (Jetline Ation Photo)

“It’s a massive task indeed to position the Bestmed Tshwane Classic alongside the Cape Town Cycle Tour and 947 as signature mass participation city cycling events in South Africa, but after the second year of presentation the race is now irrevocably set on this path.”

That’s the message from Mauritz Meyer, founder of the Bestmed Tshwane Classic, presented by Office National and Jacaranda FM. Meyer confirmed in Pretoria today that the third edition of the race will take place on Sunday 3 November 2019 “and it will take place on every first Sunday of November in years to come.

“The race was presented for the first time in 2017. It was an incredible success, attracting 5000 riders. Last year the event built on this success and reached a participant total of 7000 cyclists.

“The vision of the Bestmed Tshwane Classic is to present Tshwane’s version of the Cape Town Cycle Tour and 947 Cycle Challenge, and this is only possible through significant buy-in from the Tshwane Metro and exceptional sponsors,” said Meyer.

The race welcomes a major new sponsor for this year with Bestmed announcing last week that they support the event as headline partner for 2019.

According to Meyer, support from the city increases year-on-year. “This is pivotal to create safe passage for cyclists in the city centre, and it enables the event to incorporate landmarks on the Pretoria landscape such as the Union Buildings, Loftus Versfeld, Tshwane House, Tom Jenkins Drive, Freedom Park, Kgosi Mampuru II, and the Voortrekker Monument.”

He says the beautiful and flowing route is at the essence of the event’s success – an element underlined by participants on numerous social media platforms after last year’s race. “The Tshwane Metro Police Department (TMPD) has grown immensely with us in especially the inner-city route control.

“The Tshwane Classic is an event which brings the people of Pretoria together for one day in a year to celebrate the city’s beauty, amazing sense of community and camaraderie.

“These are all crucial elements in bringing positive change in difficult socio-economic conditions in South Africa. We are proud that the Bestmed Tshwane Classic is an enabler in this environment,” he said.

“The event is also an amazing journey for all of us in the organisation, which consisted of almost 700 individuals on race day last year,” he said.

The race is very important to the city, a sentiment emphasised by outgoing Tshwane Executive Mayor, Solly Msimanga, before starting his ride on race day last year.

“It’s vital to the Tshwane Metro that cyclists feel safe in our city and the event portrays our commitment and strong drive to promote non-motorised forms of transport in the city,” he said.

Meyer extended his thanks to the Tshwane Metro, all stakeholders and sponsors as well as Pretoria’s residents on an array of platforms “for accommodating this special race” once a year.

“It was amazing to see how accommodating and patient motorists were – and well prepared following an extensive awareness campaign in the lead-up. The event has captured the hearts of Pretoria residents and we are extremely privileged to play a part in something special which brings the people of the city together.

“It is such a wonderful way to showcase the city and display Pretoria’s delightful capacity for hosting mass participation sports events,” he concluded.

The Tshwane Metro has supported the race from the outset. Councillor Sakkie du Plooy, Member of the Mayoral Committee for Community and Social Development, says they have the stated aim of vesting the Bestmed Tshwane Classic as a major sporting event in South Africa.

The Bestmed Tshwane Classic starts and finishes in the heart of Pretoria at the Voortrekker Monument. The Monument presents the perfect venue for a mass participation cycle race with ample secure parking and venue space to activate a delightful race village.

Bestmed owes its continued growth and success to its loyal members. Bestmed is by members, for members and this philosophy is at the essence of the organisation. Bestmed is passionate about enhancing the quality of healthcare for its members’ and takes pride in its tailored Beat, Pace and Pulse plan options.

About Hectic Promotions: Hectic Promotions is a registered non-profit corporation and boasts a proven record of accomplishment in presenting mass participation cycling events which fulfil the requirements of sponsors, stakeholders and participants.